“From that time Jesus began to preach, and to say, Repent: for the kingdom of heaven is at hand. And Jesus, walking by the Sea of Galilee, saw two brethren, Simon called Peter, and Andrew his brother, casting a net into the sea: for they were fishers. And he saith unto them, Follow Me, and I will make you fishers of men.”

Here’s an interesting thought, Jesus never called lazy people who were not doing anything. He did not say, “Well, I see you don’t have anything better to do today, so I’ll just call you to follow Me.”  Matthew was sitting at the seat of customs doing what he was supposed to do.  He was busy.  Peter and Andrew were casting their nets out there into the sea. And Jesus was saying in verse 19: “Follow Me and I will teach you how to catch men.”

Sometimes people are sitting waiting for Jesus to call them and doing nothing in the meantime.  Perhaps He is waiting for us to begin doing something so that He can direct us into His purpose for our lives.  It’s easy to direct someone already in motion than it is to get them up and moving when they are sitting doing nothing.

Let’s make a decision to do something. Witnessing on the street, praying with others, ushering in church, volunteering at the local hospital, it could be anything.  But let’s be found doing something for The Kingdom when Jesus comes to invite us into our life’s purpose. 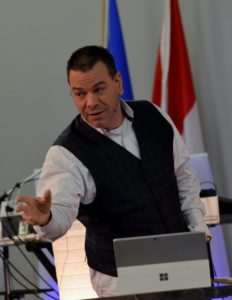 ← JOY – Jesus, Others Yourself Receive The Word As Your Answer →